These questions almost automatically arise when talking about the refugee situation before the Holocaust.

In the FAQs section of the Yad Vashem Holocaust Resource Center you find very concrete and to-the-point answers to these specific questions relating to refugees and to more than 30 other questions about the Holocaust.

When reading the answers to the above questions, you will notice that Yad Vashem mainly focuses on Jews fleeing from Germany and less on the situation of Jews living in countries neighbouring Germany. We believe that addressing this last group as well would emphasize the European dimension of the Holocaust and put the development towards the Holocaust into the context of foreign policy.

“Self Portrait with Jewish Identity Card” by Felix Nussbaum (1942, when he was living in hiding in Brussels with his wife)

The case of the German-Jewish artist Felix Nussbaum and his family is a moving example of refugees desperately seeking protection and shelter in Germany’s neighbouring countries. Just by looking at some of Nussbaum’s paintings you could start answering the above questions.

The sample lesson on refugees “Why didn’t they all leave?” – part of an online workshop on teaching about the Holocaust offered by the United States Holocaust Museum and Memorial – can complement the Yad Vashem resource.

By asking the question: “What event or action should have convinced the Jews to flee?”, we are made aware of our hindsight when talking about the history of the Holocaust.

Furthermore, this sample lesson addresses the obstacles for refugees who made the decision of leaving their country: where could they go and what was needed to get there? The resource includes two documents detailing the requirements needed to emigrate from Germany and to request immigration visas to enter the United States. 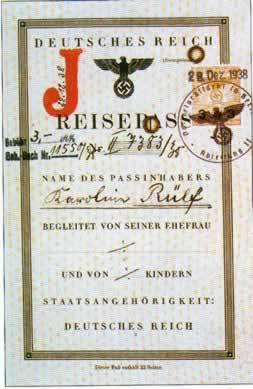 German Passport (1939) containing the red letter “J”, identifying the holder of this passport as being Jewish.

Affidavit of Support by American citizen Eugene H. Hoeber, declaring his ability to support the migration to the USA of his cousin and her daughter from Germany (1939)

This material can help make connections between past and present times. An example activity here could be to ask students to explore which documents refugees need today for legally entering the country where the students live.

Have you been confronted with one of the above questions when teaching about the Holocaust? How did you answer? Would you use one of the suggested resources as a support to discuss these questions in class? We are looking forward to reading about your experience with this topic.

One thought on “Why didn’t they all leave?”