“Without the intervention and determination of many people who are of many faiths, I – along with some 10.000 others – would have perished. I strongly believe that we must not stand by, while the oppressed need our help. We cannot ignore the sight of desperate people and in such a crisis we must act to save the most vulnerable refugees: the children, and provide them with the same sanctuary I, along with others, was fortunate to receive.” – Sir Erich Reich, letter of 3 September 2015 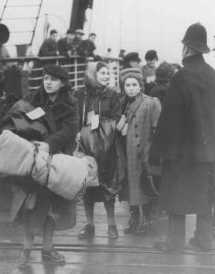 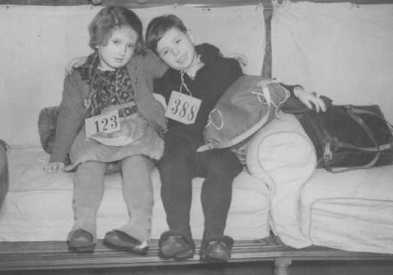 Between December 1938 and May 1940, thousands of Jewish children were brought to Great Britain from Nazi Germany. This series of rescue operations became known as the Kindertransport. The Kindertransport was initiated by the British government – under pressure from public opinion – after the violent pogroms of the Kristallnacht in Germany in November 1938.

Refugee children under the age of 17 were allowed to enter Great Britain on temporary travel visas. The children had to travel on their own as their parents could not accompany them. Infants were cared for by other children on their transport. As soon as “the crisis was over” these children would return to their families. Private citizens or organisations had to guarantee payment for each child’s care, education and eventual emigration from Britain. 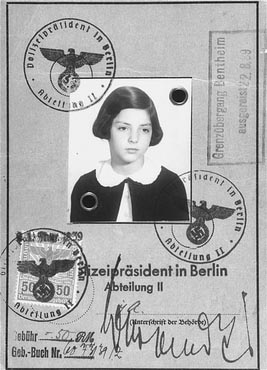 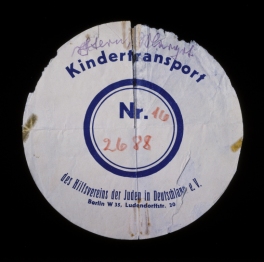 Circular label from the suitcase used by Margot Stern when she was sent on a Kindertransport to England. Germany, December 1938. Source: US Holocaust Memorial Museum 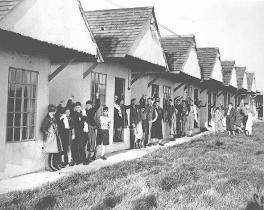 Jewish refugee children from Germany at the holiday camp at Dovercourt Bay, near Harwich, shortly after their arrival in England. Dovercourt Bay, Great Britain, after December 2, 1938. Source: Institute of Contemporary History and Wiener Library Limited

Around 10,000 children from Germany, Austria, Czechoslovakia and Poland were brought to Great Britain. Other countries also organised Kindertransports: 1,500 Jewish children were brought to The Netherlands, 1,000 to Belgium, 600 to France, 300 to Switzerland and 450 to Sweden. Most of these children would never see their parents again who were murdered during the Holocaust.

Michael Newman, Chief Executive of The Association of Jewish Refugees, introduces us to one of these children from the Kindertransport:

“In 1939, aged four, Erich Reich fled to England from Vienna via Poland with his two brothers. His parents were murdered in Auschwitz. Today Sir Erich Reich is Chairman of the Kindertransport special interest group of The Association of Jewish Refugees and an AJR trustee.

Concerned by the plight of the children displaced by the civil war in Syria and the welfare of the youngest victims of the conflict, including their flight into Europe, Sir Erich Reich has written a series of letters to both the former and current British Prime Ministers urging them to intervene and to offer sanctuary.

“It was with great sadness I heard that the proposal to resettle just 3,000 Syrian children in the UK was rejected by the government and I strongly urge you and your colleagues to reconsider how we can intervene to help some of the most vulnerable victims of an internecine conflict that has claimed the lives of hundreds of thousands of people and displaced millions.” – Sir Erich Reich, letter of 3 May 2016

The letters reflect Sir Erich’s personal horror at the situation and his grave concern that the children who managed to escape from Syria could end up being trafficked. Indeed there is also evidence that some of these children have now disappeared.

Although stressing that there are differences between the experience of the Kinder and those of the displaced children from Syria, Sir Erich nonetheless strongly feels that the British government should again demonstrate its leadership and humanity to provide refuge.

Sir Erich also points out far from being a burden on our country, given the right opportunities the children might be able to make a similar contribution to their adopted homeland as the Kinder and many other refugees have done.”

You can read Sir Erich Reich’s letters from 3 September 2015 and 3 May 2016 by clicking the links. Combined with the excellent resource on the Kindertransport offered by the US Holocaust Memorial Museum, the case of Sir Erich Reich and his call for action towards the British authorities serves as an example of how we can connect past and present refugee issues. Also, by focussing on the specific characteristics of the Kindertransport and the conditions set by the British government, we can learn more about the nature of efforts made by the international community to protect Jewish refugees against Nazi Germany.

The fact that children were separated from their parents reminds us of the current development in Germany. The German administration recently changed its policy towards Syrian refugees. Most of them are only granted subsidiary protection now instead of acknowledging them as refugees according to the 1951 Geneva Convention. A new German law, issued on Mach 11 2016, states that the right to bring near relatives to Germany is suspended for two years for people who are given subsidiary protection. Consequently, families are torn apart. The German Institute for Human Rights has argued that the German government violates the Convention on the Rights of the Child which is in force in Germany without limitations since 2010.

We are curious to hear about your experience as an educator with the topic of refugees during the Holocaust. Have you used the Kindertransport as an example of the international communities’ reaction? How would you describe the nature of different countries’ efforts to protect refugees and the conditions they set for receiving this protection? You can leave a reply below this post or contact us via email.

About the guest author:

Michael Newman is Chief Executive of the Association of Jewish Refugees, which represents and supports Holocaust refugees and survivors in Great Britain. He is a member of the UK delegation to IHRA and chairs the Communications Working Group. As well as being an advisor on Holocaust-era restitution and compensation issues, he worked with the UK government to create the position of UK Envoy for Post-Holocaust Issues and now advises incumbent Sir Eric Pickles. Michael is also a Director of the Claims Conference.

2 thoughts on “The Kindertransport”