Many people have asked me why I feel so strongly about the issue of Yazidi refugee sponsorship, and why the Jewish community of Winnipeg decided to focus exclusively on sponsoring Yazidi refugees.

To be clear, the Yazidis (an ethnic minority residing mainly in northern Iraq) are facing genocide and the world is ignoring it, much like the world ignored what was happening to the Jews during the Holocaust. For that matter, most people continue to ignore who these ancient people are. This, despite the fact we are living in an era that allows us to receive photos, news and pleas for help every day.

Similar to Nazi ideology, Yazidis are considered as sub-human. Adult men are summarily executed. There are approximately 1000 Yazidi young women and girls remaining in ISIS captivity who are being used as sex slaves, repeatedly raped each day, some as young as nine. They are sold and resold in countries across the region. Women who are “too old” to be sex slaves are used as human shields, as slaves or are executed. Many mass graves have been discovered, containing the bodies of women who have been executed, chilling reminders of the Einsatzgruppen executions of World War II. Little boys are trained to be ISIS fighters—we have seen photos of children with a teddy bear and a machete—being taught how to decapitate a prisoner. Babies are kidnapped and given to ISIS families. Shockingly, many of these details are not deemed “important enough” to make the nightly news or headlines in the newspapers. The world’s ability to ignore the Yazidis’ plight is inexcusable. When we said, “never again,” we hoped it meant that such horrific acts would never again be ignored. In today’s world of the Internet and cellphones, there is no possible excuse to say “We did not know.”

Those lucky enough to have escaped to refugee camps in Turkey face further discrimination. It is no secret they are put into segregated camps for their own protection. The shocking decimation of the Yazidis, who now number approximately one million, is ongoing, not only in Iraq but in Turkey from other refugee groups. Even at a time when people are fleeing for their lives from war and misery, they still remember to hate the Yazidis. In these camps, the Yazidis do not receive the same level of humanitarian aid as other groups. Complaints are futile at best and dangerous at worst, as they could result in a beating or other punishment.

No matter what happens in Iraq, the Yazidis have nowhere to return to. Much like the Jews of Europe in 1945, there is no home to go back to. Their homes are destroyed and they have been hunted, hated, humiliated and murdered for far too long.

Operation Ezra is a project that began in the spring of 2015. It has grown organically out of a grassroots group in the Jewish community of Winnipeg to incorporate some twenty multifaith organizations, including the Salvation Army, the Manitoba Multifaith Council, Jewish Child and Family Service, Shaarey Zedek Synagogue, King’s Fellowship Church and many others.

Our goal was to rescue and resettle Yazidi refugees in Canada. We have raised approximately $500,000 and welcomed 41 Yazidi men, women and children, comprising seven families. Our current goal is ten families, but we have no plans on stopping any time soon. As well, we have initiated a weekly English As a Second Language program for both our refugees and invite government assisted refugees to attend as well. Thanks in large part to our efforts, the tragedy of the Yazidi genocide became an important issue and was argued in Parliament by the Opposition: the government announced it would welcome 1200 Yazidi refugees and facilitate private sponsorship.

Our first family in the UNHCR refugee camp in Turkey

Waiting in Ankara with the Canadian Consul 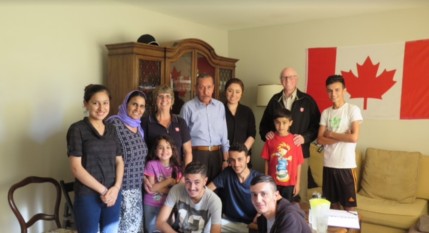 A new home! In the back row third from left is Nafiya Naso, second from right is Major Ray Harris of the Salvation Army

Most of the world has never heard of the Yazidis. People have asked me if they are Christians, Muslims, a Zoroastrian sect or even Jews. They are none of the above. It is one of the world’s oldest monotheistic religions, and recently marked its new year 6767, compared to the Jewish year of 5777. Nor are they Kurds. Often, it is the Kurds who label them so. Ask any Yazidi the question and they will quickly tell you that while they speak the Kurdish language; they do not self-identify as Kurds.

I fully support and very much welcome the absorption of all refugees: Syrians, Kurds, Somalis — everyone who needs a safe haven. But right now my community and I are looking at a situation where the world is standing silently by as a people is being annihilated. 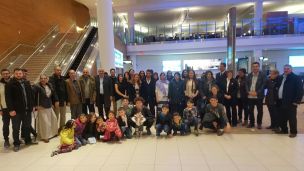 On November 22, 1942, my father’s entire family, along with the rest of his town, went to their deaths at Treblinka. That included my father’s little boy, Moishele, whom he never saw or held because my father had been conscripted into the Polish army and was taken prisoner by the third week of the war. That day, an entire extended family on both sides — disappeared forever, families that could trace their roots to a town called Zelwa back to the 16th century. Gone. Only my father survived.

The world did not care what happened to the Jews. If I have any power at all to speak out and remind the world that we said “never again” — and I believe that means that we would not stand by silently while another people is being slaughtered because of what they believe — I will continue to do so.

We in the Jewish community must do everything we can to save the Yazidi people.

And the rest of Canada and the world had better act soon, or there will not be many Yazidi left to rescue.

Belle Jarniewski has chaired the Freeman Family Foundation Holocaust Education Centre of the Jewish Heritage Centre of Western Canada since 2008. Since 2013, she has served on the federally appointed delegation to the International Holocaust Remembrance Alliance. She is also the current President of the Board of Directors of the Manitoba Multifaith Council. As a child of two Shoah survivors, Belle has felt compelled to educate students of all ages about the Shoah and other genocides. Her book, Voices of Winnipeg Holocaust Survivors (2010), documents the stories of 73 local survivors. Belle’s passion for tikkun olam (mending the world) has led her to pursue a graduate degree in Dialogue Theology at the University of Winnipeg. Believing that actions speak louder than mere words, she co-founded a Muslim-Jewish interfaith dialogue group in 2015. She is also one of the founders of Operation Ezra, an initiative to sponsor Yazidi refugees to Canada and to focus world awareness on this genocide occurring “in broad daylight.”

One thought on “Operation Ezra: A Jewish Community Responds to Genocide”