A group of prisoners in Norwich, England, may not seem the natural audience to learn about the Holocaust, subsequent genocides and contemporary othering. But during the period around Holocaust Memorial Day they, like so many others in classrooms, libraries, museums, council chambers, and myriad venues throughout the UK, do so as part of a national act of conscience, commemoration, and education.

Image: HMDT staff and participants from various sectors who took part in the workshop at Medway.

The Holocaust Memorial Day Trust – HMDT – which facilitates these events through a network of local, regional and national organisers, is very much an embodiment of the IHRA’s founding document, the Stockholm Declaration: the organisation’s purpose and vision of ‘learning lessons from the past to create a safer better future’, has the international commitment of January 2000 at its very core.

Since 2005, HMDT has been tasked by the British government to support and promote Holocaust Memorial Day – HMD – a day which last year saw over 7700 activities take place in the UK.  HMD also serves as an opportunity to commemorate non-Jewish Nazi persecution and the subsequent genocides in Cambodia, Rwanda, Bosnia, and Darfur – and in doing so, it makes it a unique and sadly apposite slice of national life.

Image: Students at Solihull School participating in a workshop to make a piece of Handprint Remembrance Artwork. HMDT

Whilst it is not for HMDT to draw a direct comparison between the history we commemorate and our contemporary attitude towards refugees and other persecuted minorities, the national day exists as a framework to explore this longitudinal relationship more critically. As the organisation states in its aims, its remit is to, ‘restate the continuing need for vigilance in light of the troubling repetition of human tragedies in the world today. To reflect on more recent atrocities that raise similar issues’. Indeed, this focus on actively engaging with complex conversations – be they in prisons or though drama, poetry, in the workspace – for all sectors, ensures HMD empowers all ages, all backgrounds to remember, learn, and act.

Each year HMDT chooses a different theme for HMD and this year’s theme – The power of words – emphasises, amongst several themes, the long shadow cast on our own attitudes towards refugees and other persecuted groups by the terminology of historical hate. As the script accompanying the HMD secondary school assembly reminds students, ‘Words can be used to discriminate, dehumanise and destroy people.’

Another resource for older audiences examines the historic and contemporary media’s role in perpetuating stigma – from the Nazi epithet of ‘vermin’ for Jews to Hutu extremist describing Tutsis as ‘cockroaches’. And again, whilst being cautious not to ascribe genocidal intention to contemporary populist headlines describing refugees trying to enter the UK as ‘hoards’, the approach to create a space where knowledge of the past enables critical examination of current narrative and agenda is crucial.

Because HMDT does not restrict itself to working in formal education or indeed expect organisers to run a prescribed programme of activities – as noted, resources and guidance are available, but not mandatory  – it gives room for each group to interpret what is meaningful for them. Thus, what might be the focus for an event run by a LGBT group will not necessarily, or appropriately, be the same as a primary school or indeed a group of prisoners.

By enabling this democratisation of remembrance and education, HMD creates a paradigm, underpinned by the principles of the Stockholm Declaration, ‘where all citizens – without distinction – can participate freely and fully’. And moreover to ‘examine our nation’s past and learn for the future’. In doing so HMD shines a light on how we treat others today – be they refugees or others marginalised in the UK or internationally.

Find out more about the Holocaust Memorial Day Trust’s work at www.hmd.org.uk

We would love to hear your experience of of using HMDT resources. Please leave comments below or join the conversation on Twitter or Facebook. 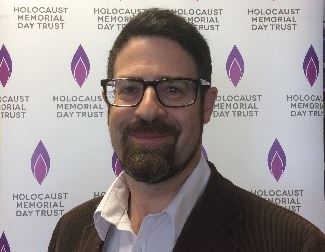 Andrew Morris is the HMDT Regional Support Worker for the East of England. He also works for the Holocaust Educational Trust, which includes taking students and teachers to Auschwitz-Birkenau so they can teach others its crucial lessons. He is a visiting lecturer in Education at the University of Hertfordshire where he is currently completing a doctorate in education examining the impact of citizenship-based programmes. Andrew also facilitates interfaith and cultural dialogue workshops for the Three Faiths Forum.