By: Gilly Carr, Senior Lecturer and Academic Director at University of Cambridge and UK IHRA Delegate

I was recently in the archives in Guernsey, examining a worn, blue book with black binding, the words ‘Aliens Register – Employed’ embossed on the front in gold lettering. This file is closed and can only be seen with special permission from the Island’s immigration department. It lists the names of non-British people who came to – and left from – this Channel Island in the 1930s. The majority appears to have come from Germany, Austria and Switzerland. How many of these people were Jewish refugees, fleeing persecution?

Among the names are three women: Polish woman Marianne Grunfeld, and Austrians Auguste Spitz and Therese Steiner. These three women are well known in Guernsey as having been deported to France in April 1942 because of their Jewish identity. Three months later they were rounded up and deported to Auschwitz.

Between October 1940 and August 1942, nine consecutive antisemitic orders were registered in the Royal Courts of the Bailiwicks of Guernsey and Jersey by the demand of the occupying authorities. Notices were published in the islands’ newspapers asking Jews to register in accordance with the first Order. A number came forward, aware that they arrived with identifying information on their passports, and fearing the consequences of non-registration.

Historian Paul Sanders argues that neither the States of Guernsey nor Jersey was willing to protest against these Orders in the interest of staying on good terms with the occupiers. They were prepared to sacrifice those in the ‘out groups’ (Jewish refugees and those who committed acts of resistance) in order to keep their influence to fight for in-groups the Germans targeted, such as Freemasons and the English-born islanders deported to civilian internment camps in Germany in September 1942 and February 1943.

A few Jewish refugees gained British citizenship through marriage to local people, which offered them some protection. This group was deported in February 1943 and included

Elizabet Duquemin née Fink, who was sent from Guernsey to Compiègne and then Biberach camps with her daughter Janet. Esther Lloyd née Silver from Jersey was also deported to these same camps. She is known through her internment diary, held by the Wiener Library and shown at my recent exhibition ‘On British Soil: Victims of Nazism in the Channel Islands,’ available online.

Jewish woman Julia Brichta arrived in Guernsey from Hungary in 1939. She was accused of being Jewish by an anonymous informer, who reported her for black market activity. Julia married a man 18 years her junior in a marriage of convenience, probably in order to acquire his nationality, just a week after the deportations of Spitz, Steiner, and Grunfeld. She never admitted to being Jewish, but was deported to Ravensbrück for her black market activity. There she became a kapo.

Hedwig Bercu, a Romanian-Austrian Jew, arrived in Jersey in 1938. She, too, denied her heritage. Despite her registration card being marked with a red J, she inexplicably worked for the Organisation Todt as a translator and was never threatened with deportation. In November 1943, fearing denunciation, she went into hiding with Dorothea Weber née Le Brocq. She survived undetected, aided by her German soldier boyfriend (and later husband) Kurt Rümmele. Dorothea was awarded the Righteous Among the Nations in 2016 after my application to Yad Vashem. She was only the second islander, after Albert Bedane in 2000, to be given such an honour.

While most of the Jewish refugees who came to the Channel Islands were women, Romanian man John Finkelstein retired to Jersey in 1931. As a non-local islander, he was deported to the civilian internment camp of Laufen in February 1943 with many others. Within days he was removed from the camp and in October 1943 he arrived in Buchenwald. He survived and returned to Jersey in 1946.

It is very unlikely that the final word has yet been written about the Jews of the Channel Islands. The relevant files remain closed to the general public, but can be read with permission from the Home Office or the local Chief of Police. To date, the number of so-called “aliens” (or refugees) – let alone Jewish refugees – has never been quantified, nor has their place or date of origin been studied. What happened to those refugees who left the Islands before the Germans arrived? Where did they go and did they suffer in the Holocaust in other countries? So much is still unknown. It is time for the files to be fully opened to facilitate research and education in the Channel Islands. However, until the 100-year closure has expired, research will be hampered. 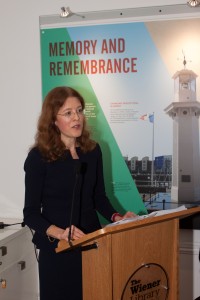 Dr Gilly Carr is a Senior Lecturer and Academic Director in Archaeology at the University of Cambridge Institute of Continuing Education (ICE). Her research and teaching focuses on post-conflict heritage and conflict archaeology, with a specialism in the victims of Nazism of the Channel Islands.From October 2018, ICE will begin a series of three online courses on Britain and the Holocaust. Learn more by checking out ICE’s Twitter or Facebook.

2 thoughts on “The ‘Foreign Jews’ of the Channel Islands”