PhD candidates from several UK universities as well as Prof. Bill Niven recently came together to create a travelling exhibition which explores the history of World Jewish Relief, from its beginnings in 1933 as the Central British Fund, until  today. Starting out as an organisation specifically designed to help European Jews threatened by Nazism, World Jewish Relief has developed into a global charity committed to helping people in all kinds of humanitarian crises, regardless of religion or ethnicity. For some 85 years now, in countries across the world, World Jewish Relief has intervened to protect tens of thousands of individuals, and some of these stories have been interwoven into our exhibition. 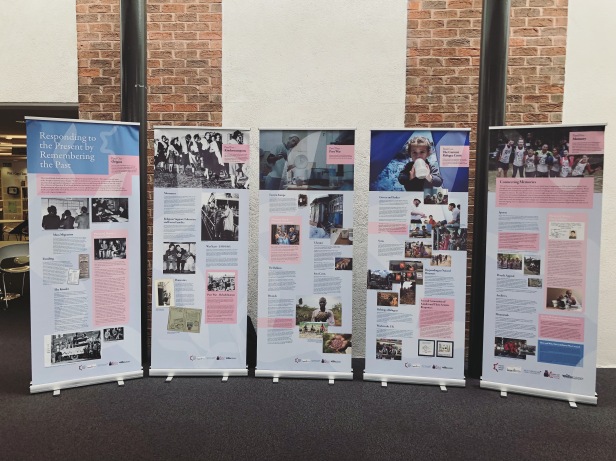 The exhibition reflects upon on how the World Jewish Relief ’s activities through history connect memories–of the Holocaust with the Rwandan genocide, of the refugee crisis during the Second World War with the Syrian civil war which currently has prompted a massive refugee crisis. If the memory of the Holocaust is to help us react sensitively to new and ongoing crises, it is important that this memory is not limited in scope and incorporates all genocides and other acts of inhumanity. The exhibition was launched at the Scottish Parliament on 15th June 2018 at the “Refugee Politics: Dilemmas and Trade-Offs Symposium” and is now currently touring to other locations around the UK. 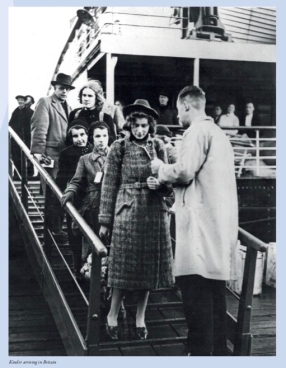 The exhibition opens with an overview of the origins of World Jewish Relief, formally known as the Central British Fund. The first panel aims to explore the historical context of their role in Jewish emigration, the initiative of saving the Kinder and the numerous funding sources for the Kindertransports. In 1933, the anti-Semitic measures imposed by the Nazis resulted in the mass migration of Jews from Continental Europe to Britain, as well as many other nations. In response to such events, the Central British Fund for German Jewry was set up to raise funds to help refugees from Nazi Germany. The organisation took responsibility for the incoming refugees and any associated costs. The Central British Fund also worked with other organisations, notably the Quakers and the Academic Assistance Council which helped academics who had lost their positions at German universities. In January 1936, the Central British Fund was merged into a larger international body, the Council for German Jewry. This panel also features the personal story of Hanna Cohn, who arrived in the UK on the Kindertransport in 1939.

Question – How can multiple organisations come together to work collaboratively to respond to crisis?

The Kindertransport theme continues in panel two as we explore how the scheme had flaws, but also how it ultimately saved the lives of nearly 10,000 children. It was, however, a huge task, and problems occurred. For example, communication broke down during the war, and it was difficult to keep track of all the Kinder. 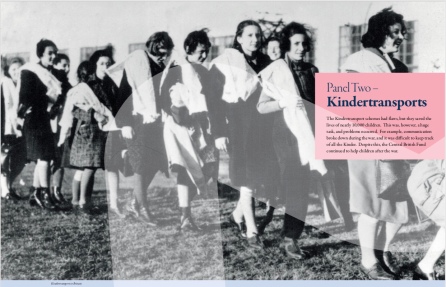 On the other hand, many Kinder were provided with religious and educational support. The Central British Fund also continued to help children after the war; children who had survived the concentration camps who eventually made Britain their new homes needed health care, training, and educational support. We also reflect upon the further movements of survivors as some moved from Britain (their first host nation) to other countries (their second or even third host nation) after the war.

Question – Why is it important that we provide support so that refugees still feel connected to their former lives?

In the post-war period, World Jewish Relief continued to respond to international crises, including further genocides, which extended its reach far beyond the Jewish community. The third panel of this exhibition looks at the aid World Jewish Relief has provided since the end 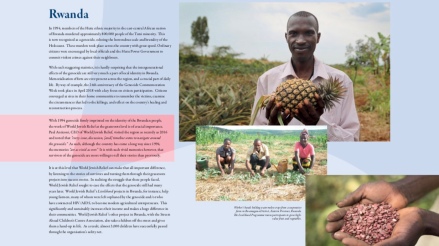 of the Second World War. The Soviet invasion of Czechoslovakia also forced 4,000 Jews to flee the country, who once again feared for their lives. The Central British Fund assisted this mass evacuation, leading the evacuees to safety in Britain and elsewhere. Similarly, after the collapse of the Soviet Union in 1989, two million Jews remained in the Ukraine, including many Holocaust survivors. World Jewish Relief began its welfare work in Ukraine during this time, providing a lifeline to hundreds of thousands of people. Furthermore, this panel explores the conflict in the Suez Crisis, from which World Jewish Relief saved 622 Jewish families, as well as the campaign to ethnically cleanse Bosnia of Bosnian Muslims. World Jewish Relief supported Jewish communities in the Balkans and brought 143 Bosnian families to safety in Britain. Finally, it addresses World Jewish Relief’s Livelihood projects in Rwanda, for instance, to help young farmers, many of whom were left orphaned by the genocide and/or who have contracted HIV/AIDS, to become modern agricultural entrepreneurs. As a result, almost 3,000 children have successfully passed through the organisation’s safety net. 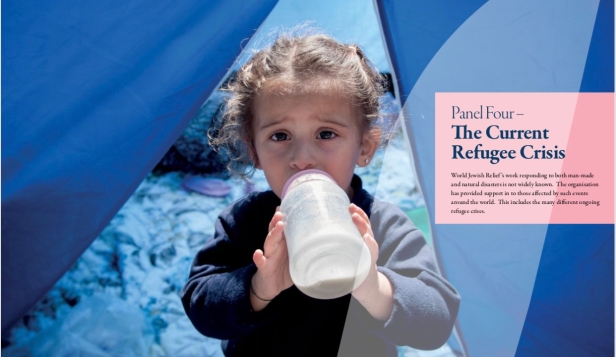 World Jewish Relief continues to support those affected by both man-made and natural disasters.  Panel four explores the organisation’s important work within Europe and beyond. The Syrian refugee crisis in particular prompted World Jewish Relief to launch their emergency appeal.  The funds raised enabled them to provide essential relief and medical supplies to displaced persons in Greece and Turkey.  In addition to this, refugees making their way to Britain are supported by World Jewish Relief’s Specialist Training and Employment Programme for Refugees.  Panel four also explores how the organisation has responded to natural disasters, such as the earthquakes that hit Nepal in 2015 and Mexico in 2017 – highlighting the organisation’s global reach.

Responding to the Present by Remembering the Past seeks to highlight how an organisation such as World Jewish Relief uses memory of the past as a catalyst for positive action in the present day.  Panel five exemplifies how World Jewish Relief engages with members of the Jewish community and beyond through fundraising activities, memorials, and the recent opening of their archives, which aims to reconnect 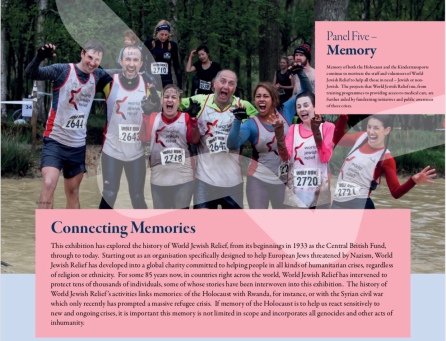 people with their family members.  One such example of how the memory of the Holocaust has prompted action is that of Ian Goldsmith. Ian approached World Jewish Relief in the hope of accessing information about his family’s Germanic roots. This led to him embarking on a 600-mile bike ride from Germany to England, raising essential funds for the charity.  World Jewish Relief is a fantastic example of how we should each strive to learn from the lessons of the past to create a better future.

You might be interested to know that the Wrap Up London 2017 Marketing Campaign, which features the Kindertrasport Statue in Liverpool Street won gold this year at the IPM (Institute of Professional Marketing) for Charity & Non-profit Marketing. It has also been nominated for the MarketingWeek awards and has been entered for the IMC European Marketing Awards.

The exhibition as a whole provides a chronological overview of the World Jewish Relief (formerly Central British Fund), and its transformation from an organisation designed solely to help German Jews fleeing Nazism into an organisation helping people across the globe experiencing various persecutions. After the World Jewish Relief opened its archives, giving families access to personal papers and records, families have had the opportunity to look into their pasts, inspiring generations to help refugees today. For example, many World Jewish Relief staff members, as well as members of the public who support the organisation, recently mounted their bikes and rode from Germany to Britain to commemorate the 80th anniversary of the Kindertransports and raise funds to support those in need today.

The story of World Jewish relief is one of adapting to meet new challenges that threaten vulnerable groups, as and when they occur. Each panel asks poignant, thought provoking questions in order to prompt the audience to engage and reflect on the ways in which an organisation can positively intervene in seemingly hopeless and dangerous situations. It teaches us about the importance of connecting the past with the present, reminding the audience that this is not a fixed action, it requires constant engagement and awareness of current events in our world. Overall, the exhibition reminds us that there is hope when people, such as those at World Jewish Relief, refuse to be complacent in the face of injustice. There is always action which can be taken, and this can yield positive results.

This exhibition was created with the support of World Jewish Relief and was funded by Midlands3Cities/AHRC. Following on from a successful Cohort Development Fund (CDF) activity in 2017 (“Debates in Contemporary Memory Studies”), M3C students at Nottingham Trent University created a new CDF, “Responding to the Present by Remembering the Past”. We led a one-day workshop with World Jewish Relief which led to a collaboration between the organisation and PhD researchers at several Midlands and London based universities. We wanted to give something back, so we are also raising funds to support the work of World Jewish Relief today.

The exhibition was researched and written by PhD students Amy Williams, Joan Salter, Elizabeth Kendrick, Hannah Wilson, Catrin Harris, Ruth Brittle, Jeanette Rodgers, Imogen Dalziel and Prof. Bill Niven (2018). Thank you to World Jewish Relief for allowing us access to and use of documents and photographs from their archive and material from their website. The Wiener Library and Hands On London also provided us with resources and photographs. Additional material was sourced from the personal papers of Dr. Amy Zahl Gottlieb (with permission of Joan Salter) and the 1979 paper The Central British Fund for World Jewish Relief given to the Jewish Historical Society by Miss Joan V. Stiebel, MBE. We also acknowledge the advice given by the Curator of the National Holocaust Centre and Museum. Thanks are also due to Glen Powell for design and artwork. We express our thanks to the survivors and their families who also contributed to the exhibition as well as to everyone who presented at our one-day workshop with World Jewish Relief.

Who wrote the blog…

Amy, Hannah, Elizabeth and Karen are PhD candidates who are all working in the field of Holocaust Studies. Midlands3Cities/AHRC fund Amy, Hannah and Elizabeth’s research and Karen is funded by the Vice Chancellor’s Scholarship at Sheffield Hallam University.

Amy’s work focuses on memories of the Kindertransports in national and transnational perspectives – link to student profile.

Karen’s work focuses on the Jewish ghettos of Warsaw and Łódź during the Second World War – link to student profile.