This November not only marks the centenary of the end of the First World War,  but it also marks another other significant anniversary– it will be 80 years since Kristallnacht on 9th November 1938. This night was a turning point for Jews and other minorities. It verified the oppression of National Socialism and the fear that Hitler’s attack on the Jewish people would become more systematic and brutal.

And, one week later, on November 15th 1938, community, religious and civic groups, including the Quakers and representatives of the Jewish community, lobbied the British government to intervene in the looming refugee crisis in Central Europe. As such, this year also marks 80 years since what would come to be known as the “Kindertransport.”

Communities, committees, campaigners, and committed individuals like Nicholas Winton worked together to convince the British government to allow the entrance of these refugees. It was up to individuals and communities across Britain to pay for each child’s care, education, and eventual emigration. And British citizens stood up. They saved what amounted to 10,000 unaccompanied child refugees fleeing Nazi persecution in Europe.

To commemorate these historic moments, communal organisations in the UK are organising a series of poignant events. On November 8th, the West London, New North London, and Belsize Square Synagogues, together with the Association of Jewish Refugees (AJR), will be holding a service in remembrance of the Kristallnacht at Westminster Abbey in London. Central to the service will be the testimony of AJR member Bea Green who is now 93 years old. Bea’s interview can be found in AJR’s Refugee Voices Collection. Bea lived in Munich and was saved by the Kindertransport, and at this event she will reflect on the events that forever changed her life and those of many other AJR members.

The AJR will also be holding a commemorative event in the Speaker’s State Rooms in Parliament on November 21st to mark the 80th anniversary of the debate in Parliament that led to the creation of the Kindertransport through which some 10,000 unaccompanied, mostly Jewish, children were given sanctuary. This famous debate was instigated by the Quaker MP Philip Noel-Baker, and this year’s commemoration will recall the role played by faith groups and civil society in pressuring the government to intervene.

This will be followed, on December 2nd, by a ceremony at Liverpool Street Station in London where the iconic Kindertransport statue, designed by Frank Meisler, himself a Kindertransport child, stands to mark the 80th anniversary of the arrival of the first Kindertransport. This event is being co-organised by World Jewish Relief and the AJR. The AJR is also planning a two day conference in the Spring of 2019, which will explore the history and legacy of the Kindertransport.

“I was my own little unit, you know, I have to survive. I couldn’t cling to anybody… I think losing the normality of childhood like that is, if you like, an irredeemable loss and while I don’t recommend it to anybody it does help you to understand things in life which you might otherwise not understand, that is to say, other people’s losses, your own subsequent loss…”– Bea Green, Kindertransportee

The largest commemoration will be on November 15th, when 1,000 people will come together – not only Kinder themselves but also their descendants, relatives of foster families who altruistically took in children, and representatives of the organisations and individuals who put their shoulders to the wheel to make it happen. The event will not only celebrate that timely action, but also the vast contribution those child refugees have gone on to make to British society.  These guests will be joined by politicians, faith leaders, Nobel laureates, leading public figures and child refugees who have recently arrived in the UK.

The commemoration on November 15th  will be an opportunity to commemorate, and  also to acknowledge, that today another refugee crisis is unfolding, where child refugees are in need of the same compassion and tolerance that was shown in 1938-39.

There are more child refugees in Europe today than at any point since World War Two, many of whom are unaccompanied. There are many reasons as to why a child might arrive in Europe on their own. Some have been sent by their parents hoping their child will have a better life away from conflict, some are orphaned while others have been separated from family en route by smugglers or in the chaos of the journey fleeing for safety.

In 2017 alone, nearly 33,000 refugee and migrant children arrived in Europe; over 60% were unaccompanied. In Greece, 2,800 children are street homeless or living in camps whilst over 5,000 children are missing across that country. Learn more about how to get involved with the work of Safe Passage through their website, 80 Years On.

This year, as we commemorate the Kindertransport and give thanks for those who were saved, we will also consider how we can honour that legacy and help today’s child refugees.

Barbara Winton is the daughter of Sir Nicholas Winton, who organised the Czechoslovak Kindertransport that brought 669 endangered children to Britain in 1939.  She wrote her father’s biography: ‘If it’s Not Impossible’, published in 2014, and over the past 10 years has given talks about her father’s legacy and the Kindertransport, in Britain, the USA & the Czech Republic. She campaigns for compassion and assistance for today’s child refugees, supporting her father’s view that examining history is only useful if it impacts today’s issues. 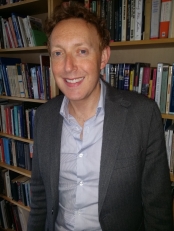 Michael Newman is Chief Executive of the Association of Jewish Refugees (AJR), which represents and supports Holocaust refugees and survivors in Great Britain. A previous Chair, he is a member of the Communications Working Group of the International Holocaust Remembrance Alliance (IHRA). Michael is President of the Anglo-Jewish Association (AJA), which supports Jewish students to attend higher and further education and is a founding member of the Claims Conference of which Michael is a Director. He recently co-edited Contemporary Human Rights Challenges: The Universal Declaration of Human Rights and its Continuing Relevance, an edited collection of new essays by leading international human rights experts.